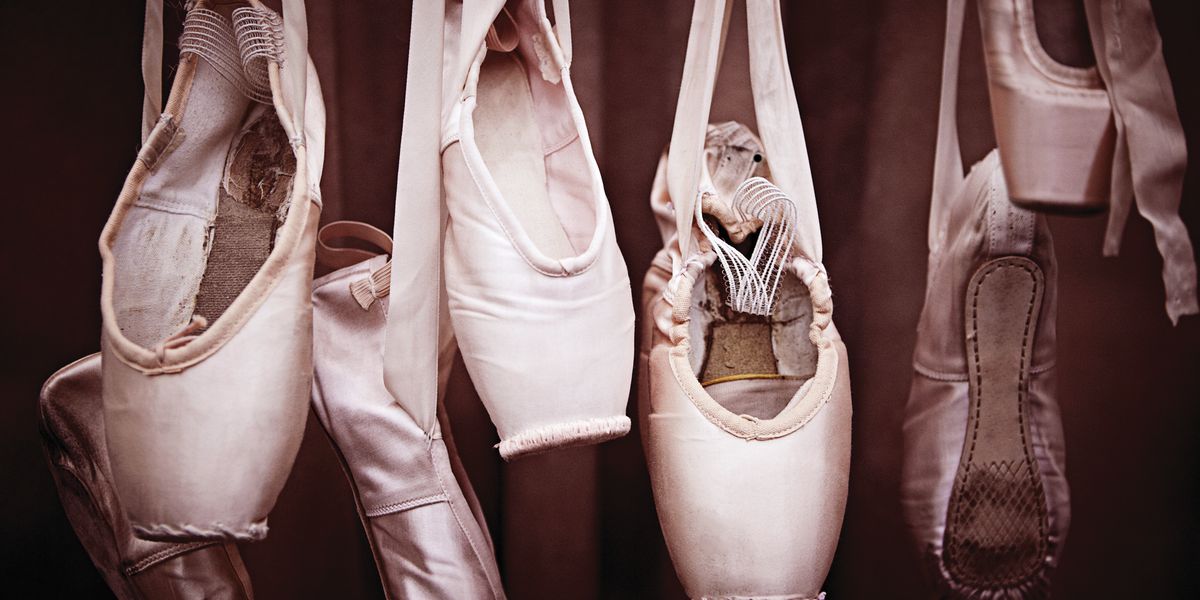 The History of Pointe Shoes: The Landmark Moments That Made Ballet's Signature Shoe What It Is Today

Pointe shoes, with their ability to elevate a dancer both literally and metaphorically to a superhuman realm, are the ultimate symbol of a ballerina’s ethereality and hard work. For students, receiving a first pair of pointe shoes is a rite of passage. The shoes carry an almost mystical allure: They’re an endless source of lore and ritual, with tips, tricks and stories passed down over generations.

The history of pointe shoes reveals how a delicately darned slipper introduced in the 1820s has transformed into a technical tool that offers dancers the utmost freedom onstage today.

During ballet’s creation in the courts of Europe, dancers wore heeled shoes in line with the era’s aesthetic. In the 1730s, Paris Opéra Ballet dancer Marie Camargo was the first to remove her shoes’ heels, forging the way for the soft slipper we know today. “Camargo is the transitional point between a heeled shoe and pointe shoe. She is the ballet slipper,” says Linda Murray, curator of the Jerome Robbins Dance Division of the New York Public Library for the Performing Arts. The slipper allowed Camargo to perform leaps and fast allégros that were not possible in heeled shoes, expanding movement vocabulary for ballerinas.

In the late 18th century, Charles Didelot, a Paris Opéra Ballet dancer-turned-choreographer, invented a wire rigging that allowed dancers to “fly” onstage. The apparatus lifted dancers up onto their toes before they flew. “His ballet Flore et Zéphire introduced the idea of weightlessness,” says Murray. “From a choreographic perspective, this is the first notion of what it means to dance on pointe.” In 1823, the Italian dancer Amalia Brugnoli introduced pointework to ballet audiences, rising up to the tips of her toes in Armand Vestris’ La Fée et le Chevalier. Brugnoli wore lightly stitched square-toed satin slippers, and had to use her arms and a visible amount of effort to get up on her toes. Nevertheless, she inspired the other dancers of the day, including Marie Taglioni, to practice the technique. In 1832, Taglioni became the first to dance a full-length ballet on pointe when she premiered La Sylphide, choreographed by her father, Filippo Taglioni. “Marie Taglioni gets the credit and the blame for introducing pointework,” says Eliza Gaynor Minden, the head of design behind pointe shoe company Gaynor Minden. For Taglioni, rising up on pointe was more than just a stunt; she used her shoes—tight-fitting, darned, leather-soled satin slippers tied with ribbons—to convey character and emotion. Other Romantic-era ballerinas, particularly Fanny Elssler, who excelled at fast footwork, pushed pointework even further in the years that followed. Later in the 19th century, Italian shoemakers developed reinforced pointe shoes with stiff boxes made from newspaper, flour paste and pasteboard. The shoes’ cardboard insoles were reinforced with leather. “The Italian ballerinas were able to do more bravura steps on pointe, including sustained balances and multiple pirouettes,” says Minden. Italian dancers traveled to Russia, where ballet was extremely popular in the imperial courts, and ultimately influenced Marius Petipa to incorporate pointework into his ballets. He used it to help define his characters, such as Princess Aurora in The Sleeping Beauty, whose long balances demonstrate her poise.

Early-20th-century prima Anna Pavlova had very high, unstable arches, so she put leather soles inside her pointe shoes and hardened the box for more support. When she made her first trip to the U.S. in 1910, Pavlova had her company outfitted in shoes made by the Metropolitan Opera shoemaker Salvatore Capezio, thereby launching the first international pointe shoe brand. While Pavlova helped bring pointe shoes into the modern era, her shoes still had a very rounded toe and narrow vamp, making them much less stable than those worn today. “Footage of Pavlova even shows that she’s sort of rocking on her toes the entire time she’s on pointe,” says Murray. Throughout the 19th century, the main purpose of the pointe shoe was to serve a ballet’s narrative, distinguishing the mortals from supernatural fairies and sylphs. “But in the 20th century, particularly with the emergence of the Ballets Russes and then George Balanchine, you start to see an interest in pushing the vocabulary of ballet instead,” says Murray. Over the next several decades, innovators from Bronislava Nijinska to William Forsythe expanded the physical limitations of ballet technique, leading to a demand for a stronger, more supportive shoe. Designs like the flat, platform box we are familiar with today were developed to give dancers more control.

In recent years, scientific approaches to pointe shoe construction and training have helped the shoe adapt to contemporary choreographic demands. In 1993, Gaynor Minden launched a shoe inspired by the shock-absorption found in athletic footwear, opening the door for other designers to experiment with modern materials to improve shoes’ durability and fit. Emerging research in dance medicine has also made pointework safer. Dr. Sue Mayes, director of The Australian Ballet’s pioneering Artistic Health program, collects data on all musculoskeletal complaints in the company, and she advises that proper fit for shoes is paramount to injury risk reduction. “The foot needs room to expand and contract to allow the shoe to act as a spring,” she says, “We encourage dancers to be reassessed every year, even as adults.” Mayes also stresses that proper preparation, gradual reintroduction of pointework after a break from dancing, and full leg strengthening can allow a dancer to perform on pointe without fear. “The last thing we want is for a dancer to feel cautious onstage.”

In the early 1970s, Dance Theatre of Harlem began customizing the company dancers’ tights, pointe shoes and ribbons in shades of brown to match their skin tones. The effect was revolutionary for classical ballet. But it isn’t until recently that pointe shoe manufacturers have started releasing shades that reflect the diverse skin tones of the ballerinas wearing them. Gaynor Minden released a collection of inclusive satin shades in 2017. The following year, Freed of London followed suit, in collaboration with the London-based dance company Ballet Black. And in the midst of June 2020’s nationwide protests demanding racial justice, brands Bloch, Russian Pointe, Capezio, Nikolay, Grishko and Suffolk jumped on board, promising expanded lines released within the year. These options have helped free dancers from pancaking their shoes to match their skin tones, which can be costly and time-consuming. Most importantly, redefining what a pointe shoe looks like breaks down a long-outdated construct and makes ballet more accessible and welcoming to all.

The history of men performing on pointe, in works ranging from Bronislava Nijinska’s 1924 Les Fâcheux to those by Sir Frederick Ashton, Alexei Ratmansky and Mark Morris, has been to a largely comedic effect. Though the drag company Les Ballets Trockadero de Monte Carlo has brought real innovation and artistry to men’s pointe technique, it’s still been used to portray women. However, society’s recent reexamination of gender norms has made pointework more accessible to dancers of all gender identities, with choreographers like Michelle Dorrance, James Whiteside and Dwight Rhoden weaving it into new works. In 2019, Russian pointe shoe company Siberian Swan released the Rudolf, a model designed specifically for men. Pointework can also be an important strengthening tool for all dancers. “Occasionally we’ll put men into pointe shoes as part of their rehabilitation,” says Dr. Sue Mayes, director of The Australian Ballet’s Artistic Health program.