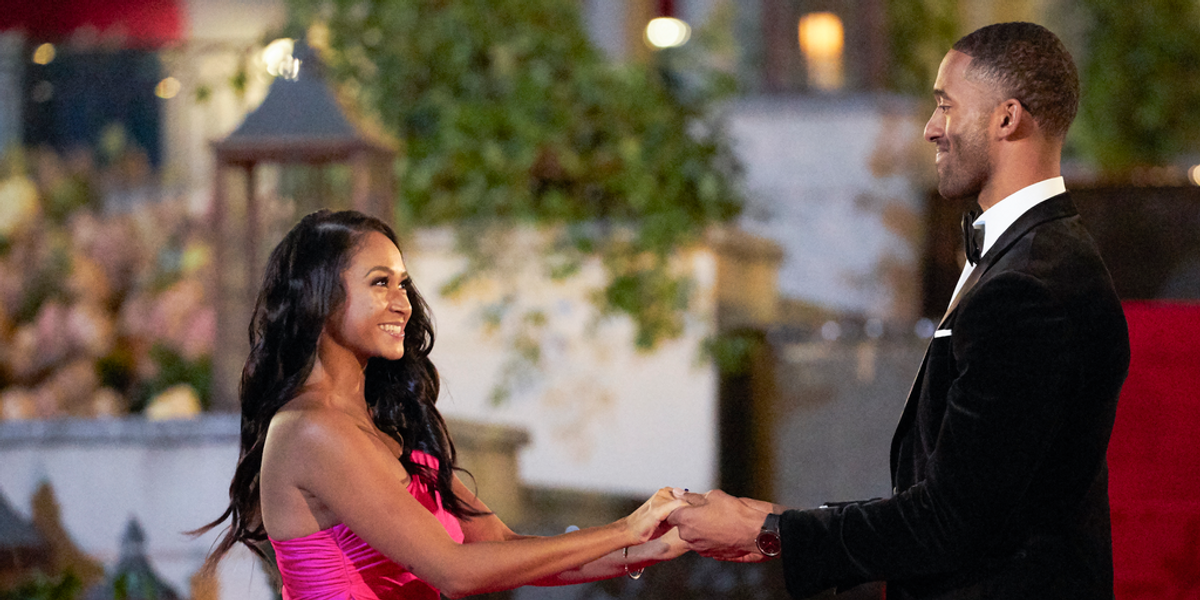 Bunheads tuning in to the season premiere of ABC’s “The Bachelor” on January 4 may have recognized a familiar face: Dance Theatre of Harlem’s Alicia Mae Holloway, literally bourréeing out of a limousine to greet bachelor Matt James. While Holloway unfortunately didn’t get a rose that night, she did thoroughly enjoy being the long-running reality franchise’s first professional-ballerina contestant, as she told Pointe in a recent Zoom call.

Have you always been a fan of “The Bachelor”?

My friends would watch it back when I was a student at the School of American Ballet. I watched one episode and was like, “What is this?! Why would people do this?!” A few years later, I started Colton Underwood’s season because I was feeling really left out in my group chats. I binged the whole season and became obsessed.

How did you get cast?

One of my best friends (Jacqueline Bologna, of New York City Ballet) told me to apply. I wasn’t sure but filled out the online application anyway—and promptly forgot about it. One day, I got a random call from L.A. The voicemail said, “Hey Alicia, this is so-and-so from ABC’s ‘The Bachelor,’ and we’re really interested in you.” It all happened from there!

During the audition process, did you emphasize your career and identity as a ballerina?

Did you have any misgivings about going on the show, like whether the ballet world would view you differently?

That was at the forefront of my mind throughout this whole process. I’d read articles about people who lost their jobs and couldn’t find another one after coming off the show. That was my main concern, because my career has always been first and is always going to be first. But I felt in my heart that this was something I really wanted to do. I decided that if people don’t want to work with me because I did something I wanted to do, that’s on them and they’re missing out on me.

Were you concerned about taking time off from Dance Theatre of Harlem?

At DTH we tour 16 to 18 weeks out of the year. Obviously, we can’t do that now due to COVID-19, so we’ve been doing virtual classes and workshops. The company got to go to Kaatsbaan in the fall, which looked amazing—I obviously was not there. Basically, I realized that now was the time to go on “The Bachelor” if I was ever going to do it. We just got back to work in the studio last week, so I think the timing all happened perfectly.

Did you feel any kind of pressure to represent ballerinas—and ballerinas of color—on national television?

Arthur Mitchell, who founded DTH, said something once that stuck with me: “Cinderella doesn’t walk into the ball. She arrives.” What that says to me is, you have to present yourself in the best way possible all the time. You always have to be the best version of yourself and present yourself with the most class and integrity. I do want to be a role model and uphold my reputation, because I never had a professional ballerina who looked like me to look up to when I was young.

How did you plan to keep up your technique and stamina while on the show?

Before I left, I made a promise to myself and to my boss that I’d give myself daily ballet class. I wrote down at-home workouts and my favorite pointe exercises, and I brought two pairs of pointe shoes: one newer and a more dead pair for building my strength with.

You got a lot of screen time in the premiere episode (watch it
here), prepping your pointe shoes and dancing around the resort.

Yeah, I was shocked by how much they ended up showing! I just wanted to showcase my real daily life as a dancer.

Did you pre-choreograph that (amazing) exit from the limo?

It literally came to me in the moment. At first I thought I might do a grand jeté, but immediately realized the dress was not made for it!

How did the other women react when they learned you’re a ballet dancer?

Honestly, they were so kind. Everybody went, “Oh, my gosh, I’ve never met a real-life ballerina!” There weren’t any ignorant or awkward questions. It was validating to get such a positive response.

Understandably, there were a few tears in your interview after the rose ceremony. What was going through your mind when you realized your “Bachelor” journey was over?

There were a lot of emotions. To viewers, the night seems short, but it is long—and I’m an emotional person. What got me through was reminding myself that everything happens for a reason. I was very upset that I didn’t get to speak to Matt because we have things in common. He went to Wake Forest University in Winston-Salem, I went to the University of North Carolina School of the Arts in Winston-Salem. He lives in New York, I live in New York. He has a white mom and a Black dad, I have a white mom and a Black dad. I was obviously sad when I left, but I do feel like Mrs. James could be in that amazing, intelligent, badass group of women. I left feeling that Matt was in good hands.

Has the show changed your life at all?

My Instagram following went up, and I’ve gotten more offers to do photo shoots and stuff like that. I shot my first music video in December. The reaction from the dance world has honestly been nothing but great. I really thought people would throw shade, but everybody has been so supportive. I’ve gotten a lot of messages from people who were mad I was voted off. [Laughs]

What have you been up to since the show?

Life has been great overall, though I didn’t get to work with DTH from the end of September until January 4. I was a little bored at first, in part because I couldn’t go on social media in case people figured out I got eliminated. So I kept myself busy and created routines, because I thrive when I have a set schedule. I taught at SAB for a week back in the fall, and I taught a lot in Pennsylvania and in West Virginia, where I’m from. I’m now back in New York and ready to return to the studio with DTH.

What advice do you have for other ballet dancers who are presented with an opportunity like this?

If your gut is telling you to do it, go for it. Life is short! If you can make it work while keeping your dance career your number-one priority, then I would highly recommend going for an unconventional, once-in-a-lifetime chance.