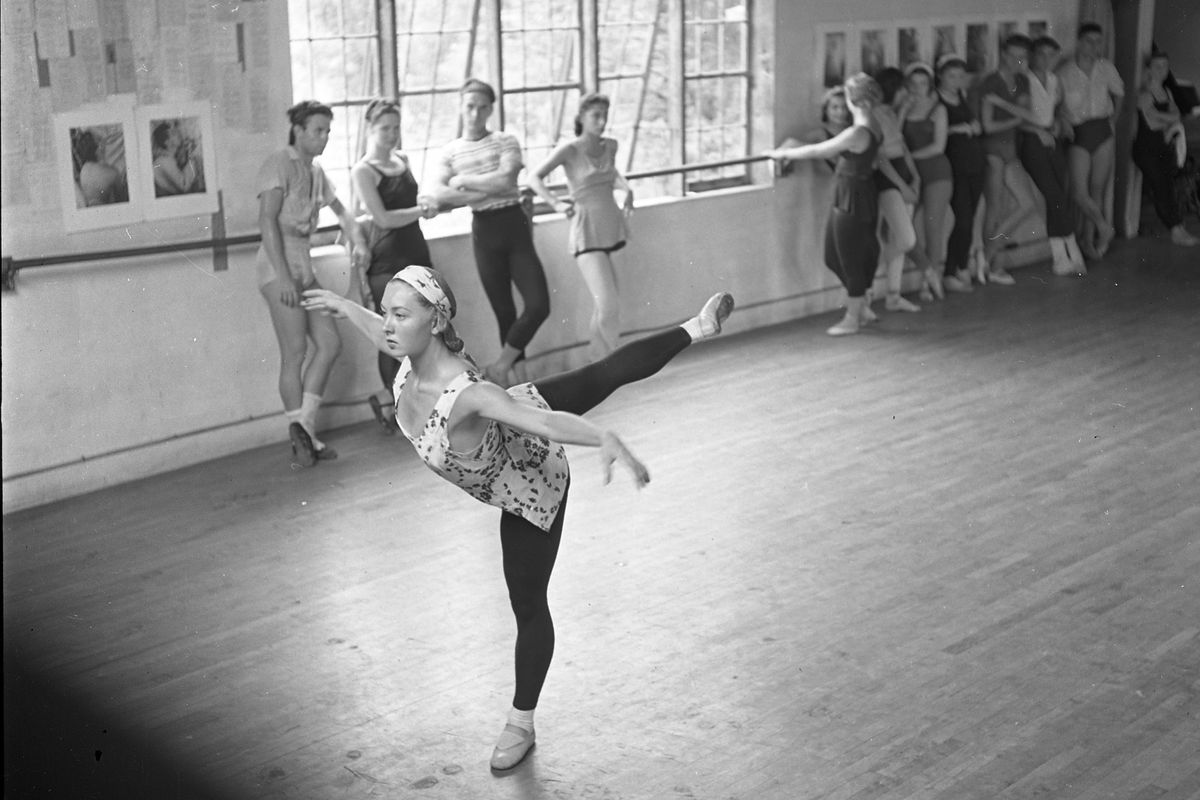 Dancewear Through the Decades: 100 Years of Studio Fashion, From the Chiton to the Leotard

In March 2020, American Ballet Theatre principal dancers James Whiteside and Isabella Boylston taught a class on Instagram Live with the theme “Vintage Ballet.” Boylston dressed as Scottish-born ball­­erina Moira Shearer (star of the 1948 classic film The Red Shoes) and Whiteside as Rudolf Nureyev, and they encouraged viewers to join in. Dancers around the world followed suit, posting their vintage-inspired looks online. Looking at this wide range of styles made me wonder: What did dancers wear before they had a wardrobe of stretchy leotards to choose from? Below, we look at some of the ballet-class fashions that have graced studios over the last 100 years.

For much of the 20th century, there was no stretch fabric and no ready-to-wear dance clothing. Dancers often made their own outfits or adapted items of street clothing. However, just like today, what was worn in the studio reflected the fashions of the day.

In the 1910s and ’20s, influenced by the movement and costume of modern-dance pioneer Isadora Duncan, the female uniform for class was the chiton, named and modeled after the long tunic worn in ancient Greece. The early-20th-century chitons were often made of silk or knitted jersey (which allowed some stretch), and gathered under the bust and around the hips.

Lydia Sokolova, a British dancer with The Ballets Russes, wrote in her memoir Dancing for Diaghilev that before World War I the company’s female dancers wore: “For class… white tutus and pink silk tights, but for rehearsal… we wore crêpe-de-chine dresses which took three and a half meters of material to make. They were caught in with one bit of elastic under the breast and another around the thigh, and they fell in pretty draperies just below the knee.”

Sokolova wrote that these chitons were easy to move in, and each dancer had theirs made in a different color. But in the 1920s, these rehearsal dresses were simplified and shortened. “Diaghilev came into class one day and announced that since it was more than ever difficult under war conditions to get nice material and keep things clean, all the girls in the ballet should wear black tunics in rehearsal,” wrote Sokolova.

Men’s practice clothes during this time consisted of white loose-sleeved shirts and dark trousers cut below the knee, with knee socks and leather shoes. The influence of this look is still seen today in many ballet-school uniforms, where men wear white socks and tights.

In the 1930s and ’40s, the long chitons were replaced by shorter tunics and skirts. Dancers often took advantage of ready-to-wear items that could be repurposed for dance class. Men exchanged trousers for shorts, knitted tights and leggings. In a series of photos taken at Jacob’s Pillow in the summer of 1941, ballerinas Alicia Markova and Irina Baronova take class wearing floral playsuits, which were the height of fashionable beach and leisure wear at the time. These would have been made of cotton and had little to no stretch in them. However not all dancers could afford, or had access to, ready-made clothing, and many still made their own practice wear.

The recent exhibition “Ballerina: Fashion’s Modern Muse” mounted at The Museum at FIT showed several examples of homemade practice wear from this era, including a sweater and a short, full skirt made by the mother of Ballet Russe de Monte Carlo dancer Joy Williams Brown

In the early 1950s, dancewear started to become more streamlined. Female dancers wore high-waisted briefs over tights and with short blouses. Tunics were still worn, but were often tucked in at the front to give the illusion of a one-piece garment.

In the 1960s, the leotard became more common as practice wear. The leotard was created by 19th-century French acrobat Jules Léotard. Up until the 1960s, leotards were worn mainly by circus performers and gymnasts. The first leotards for ballet were made of knitted cotton fabric, which allowed for some stretch but easily became baggy. This was followed by Bri-Nylon, which offered stretch but would still become misshapen.

The 1960s saw the invention of a stretch fabric that would not bag and lose shape. Spandex, known under the brand name Lycra, was patented in 1958 and released to the public in 1962. It was initially used in the underwear industry but eventually made its way into dancewear, revolutionizing first practice wear and then stage costumes.

The 1970s and ’80s brought the rise of stretch one-piece leotards, unitards, leggings and tights. Primarily used in the fitness industry (particularly gymnastics), these items became popular with dancers. These new clothes closely fitted the body, retained their shape and were easily washed. They could also be produced in a huge range of colors and styles.

Soon companies began producing lines of ready-to-wear dance clothing, leading us to today. Now we are spoiled for choice, with many professional dancers releasing their own designs. Next time you reach into your drawer for your favorite leotard and tights, think of the generations of dancers that came before you and what they wore.