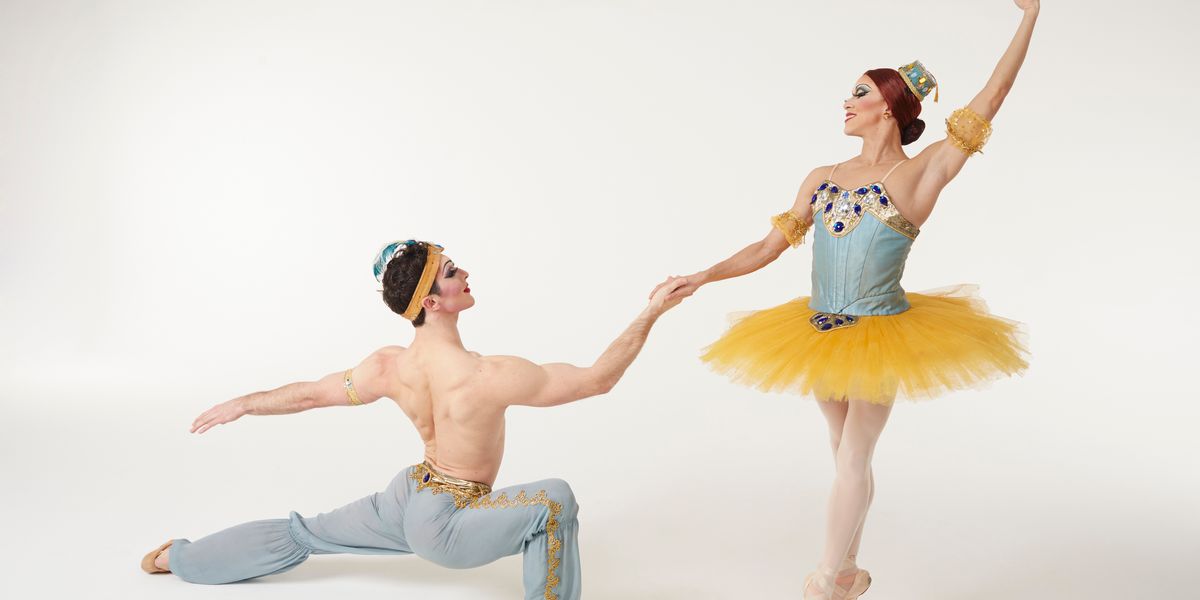 Meet Carlos Hopuy, the Trock Who Will Put Your Pointework to Shame


One of the highlights of New York City’s Fall for Dance Festival this year was an appearance by the Ballets Trockadéro de Monte Carlo, a company of men who dance on pointe with as much panache and style as any prima ballerina. Their performance of Paquita was funny, of course—they specialize in comic renditions of classical ballets— but also bracingly well executed. The star of the evening, Carlos Hopuy, aka Alla Snizova, was simply astonishing. His pointework sparkled, his hops on pointe were clean and strong, and he looked like he could have balanced in attitude forever. There was something deeply exciting about the way he combined delicacy and control with the explosive power and steel of a man’s physique.

Hopuy, who was born in Havana, Cuba, and trained at the country’s famed National Ballet School, has been with the company since 2012. Like all the Trocks, he has both a female and a male alter-ego: when he’s not portraying Alla Snizova, he’s Innokenti Smoktumuchsky, a dopey cavalier. He is also one of the dancers featured in the upcoming documentary Rebels on Pointe, which will have its theatrical release November 15. I recently caught up with Hopuy, who, when he’s not on tour, lives in Orlando with his husband Paolo Cervellera, a former Trock. We spoke by phone, in Spanish.

Did you always want to dance?

I always liked ballet. My mother, Norma Hopuy, was a principal with the Ballet de Camagüey. I used to hang around the rehearsals. She started giving me lessons at home. Then, when I was nine, I auditioned for the National Ballet School. I had the choice between that and gymnastics and I chose ballet.

When did you start going on pointe?

When I was 11. I would ask my classmates for their old pointe shoes and would try them on at home. When my mother realized that I liked to go on pointe, she started training me and bought me my own pair.

Was your entire pointe training done at home with your mother?

Yes, all of it. She got it right away and never asked me why. She knew she had the ability to help me, and so she did.

Did you ever get to dance on pointe in Cuba?

Actually, I got to dance on pointe at my graduation performance. My teacher created a version of Sleeping Beauty for me in which Carabosse went on pointe, and even did fouettés.

Was the idea of a boy dancing Carabosse on pointe accepted at the school?

At first the authorities at the Ballet Nacional de Cuba didn’t want me to do it because they couldn’t understand why you would have a man on pointe. They organized a separate audition for me, to see if I was really ready. There were rumors that there was a kid at the school who could dance better on pointe than a lot of the women at the Ballet Nacional. So the four “Jewels of Cuban Ballet” [Loipa Araújo, Aurora Bosch, Josefina Méndez and Mirta Plá] came to audition me and confirmed that yes, I was good enough. But it created a lot of controversy.

Why weren’t you taken by the Ballet Nacional?

They said it was because I was too short [Hopuy is 5’5″], but I think the dancing on pointe was also a factor. There was a bad feeling about it in the air. After graduating, I spent six months at home, doing nothing, because the Culture Ministry said I was a young talent who had been formed by the Revolution and my talent was too great for me to dance in any other company than the Ballet Nacional. So they wouldn’t let me leave the country. Finally, they allowed me to dance with a company run by Laura Alonso, Pro Danza.

How did you get from there to the Trocks?

I went to Costa Rica with official permission and danced with the National Ballet of Costa Rica for four years, in traditional male roles. Then, a friend invited me to Mexico to dance Coppélia. I went, and then I decided to cross the border into the U.S. illegally. At the time it was not so difficult for us Cubans to stay the U.S. I spent four years at Ballet San Antonio, and then I reached out to the Ballets Trockadéro. I auditioned, and the same day, I got a contract.

One of the striking things about the Ballet Trockadéro is that the company spoofs ballet, but at the same time, all the dancers are tremendously good at the very thing they are poking fun at.

Yes, the jokes are built into the ballets, but the technique is always present. When I dance, I’m serious about what I’m doing. It takes just as much rigor, or even more, to do what we do. And I think that making people laugh is even harder than making people cry.

What do you enjoy most about the ways the Trockadéro rep tweaks the repertory?

What I like is that it doesn’t take it all so seriously; it takes that tremendous pressure that exists in traditional companies down a notch. In traditional ballet, people get so upset if even the slightest thing doesn’t go right. At Trockadéro we feel bad, but not as bad.

Do you also enjoy dancing traditional male roles from time to time?

I do. There is something so explosive; the dynamic is different. I still do a few things here and there.

Where do you take class?

In New York, I go to Nancy Bielski’s class at Steps on Broadway. And in Orlando, I take class at Central Florida Ballet.

Have you ever thought about teaching a pointe class for men?

I would love to. It’s an idea I have for the future: a ballet school just for men. When you go onstage, do you feel like you’re dancing yourself, or a character that you’ve invented?

Part of it is me. I have to put all my love and all my effort into it so that it will look natural. But another part is the ballerina. That ballerina is part of me, but she’s not there all the time. When you put on that wig and those eyelashes this other part, that you like to explore, comes out.

Yes. The superhero is there, but she only comes out sometimes.