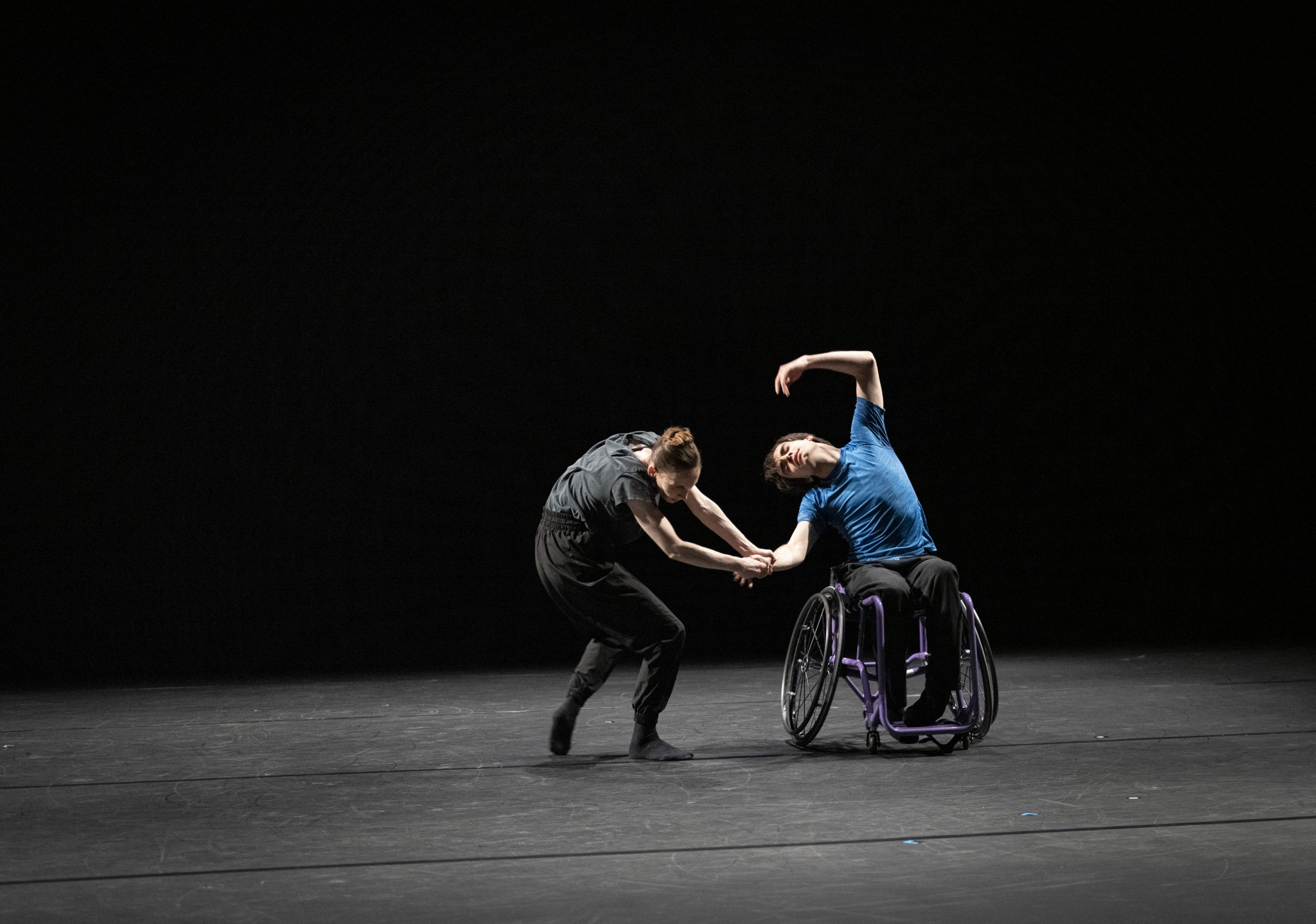 In “Sleepwalker,” A New Producer Brings A Dancer Using a Wheelchair to The Royal Ballet

Sleepwalker, which had its first showing at The Royal Ballet’s Spring Draft Works series this year, features Joe Powell-Main, a dancer who uses either crutches or a wheelchair in his daily life. The piece is the brainchild of Alexander Campbell, a Royal Ballet principal dancer, who is stepping into dance-centered arts production.

Powell-Main continued to train, including four years at the Royal Ballet School, where he had more such “pinch me” moments. After a knee injury and then a major car accident, however, his dancing days appeared to be over. But he later found a way to return to performance through using his wheelchair and crutches, dancing with Ballet Cymru in Wales—a different career than he had envisioned as that young boy in Sylvia.

So it was a surprise when, last year, Campbell called him and asked if he’d like to dance in a new piece he was directing and producing for The Royal Ballet’s Draft Works series, Sleepwalker.

“I never thought I’d be in a studio like that again,” says Powell-Main, who also cites creative producer Emma Southworth and Royal Ballet artistic director Kevin O’Hare as integral to getting the project up and running. “To be seen for my dancing and what I had to offer, it was a great opportunity.”

It was also an opportunity for Campbell, who is looking beyond his performing career to producing. He did not choreograph Sleepwalker. He came up with the concept for the piece and pitched it to The Royal Ballet. A pas de deux, he selected Powell-Main and Royal Ballet first artist Isabel Lubach to dance and Kristen McNally to choreograph. He and McNally commissioned the score from Sophie Cotton. He then offered his insight and support as needed during the process to everyone involved.

“I had no desire to choreograph this,” says Campbell. “I had an idea, and wanted to use it to open up conversations between different artists to try new things.”

The piece premiered at five minutes long, expanding to 10 minutes for a performance at a September festival that was canceled when the UK went into official mourning over Queen Elizabeth II’s death. A preview film is now live as part of World Ballet Day, and Campbell has plans in the works to keep developing the piece.

Here, Powell-Main and Campbell tell us about how this came together and what it means for the new paths they are charting in ballet.

How did you two find each other for Sleepwalker?

Joe Powell-Main: I danced in the welcome-home ceremony for Paralympic athletes in 2021 in a piece with Royal Ballet dancers choreographed by Kristen McNally. That’s where Alex saw me.

Alexander Campbell: At the time I saw Joe I had been thinking about the ballet La Sonnambula and how dancers could portray sleepwalking in so many different ways. I dug into the history of the opera and found inspiration from the themes, the essence of it. When I saw Joe onstage, I knew his qualities would be perfect for this.

Joe, what was it like bringing the chair into The Royal Ballet’s studios and working with the team?

JPM: I’ve worked with choreographers who didn’t utilize what was in front of them. They’d leave me to sort out how to use the chair or crutches in the piece. The chair has a gliding quality; it can go slow and roll across the space, then it darts with a completely different dynamic. Alex wanted to explore this and told me he saw the chair and me as moving together as one. With him and Kristen being so accomplished, I wasn’t sure how open they’d be, but they didn’t claim to know how the chair works. They came ready to learn.

How did the piece unfold in rehearsals?

AC: Kristen developed the movements and phrases with Isabel and Joe. The pacing of the piece came more from me because I stepped back and looked at the bigger picture.Kristen was incredibly gracious. She was open to any suggestions I made, and we shaped to where we found it satisfying. It was a different model than most ballets, where choreographers have total control over the piece. We were learning on the fly.

JPM: The piece is open to interpretation, but mine is that Isabel is the sleepwalker and I’m a physical representation of her mind throughout her dream and sleepwalking. I can be quite supportive and caring, but at other points there’s a fight over who can be more dominant. At certain points, I feel quite evil. What Alex and Kristen instilled in me was to commit to everything and be confident.

Do you see this piece as the start of changes you’d like your work to bring to ballet?

AC: Definitely. On a personal level, bringing artists together is exciting to me. Opportunities are sometimes missed because people don’t know or think to work together. That’s why I started my production company [Alexander Campbell Productions]. So I’m looking to do more of this kind of work, and I do believe Sleepwalker has the potential to be part of a triple bill or even a full evening. We developed so much material, this was just the beginning.

The idea of working with Joe was purely about his movement quality—it was a narrow focus. But after working with him, I think, Wow, there are dancers of so many capabilities and qualities. If this project gives one other person an idea to work with an artist from a nontraditional background, how rewarding, on a creative level.

JPM: I’m a different kind of dancer, but I should have parity with standing dancers. Many companies aren’t ready to work with a dancer like me yet, but I want to show them that it’s possible. I’ve reached out to many and not heard from them. Here, Alex came to me and we all worked together to create something new, beautiful and inclusive. If we want to see more dancers with disabilities working with major ballet companies across the world, we need to learn to combine tradition with the work of the future.