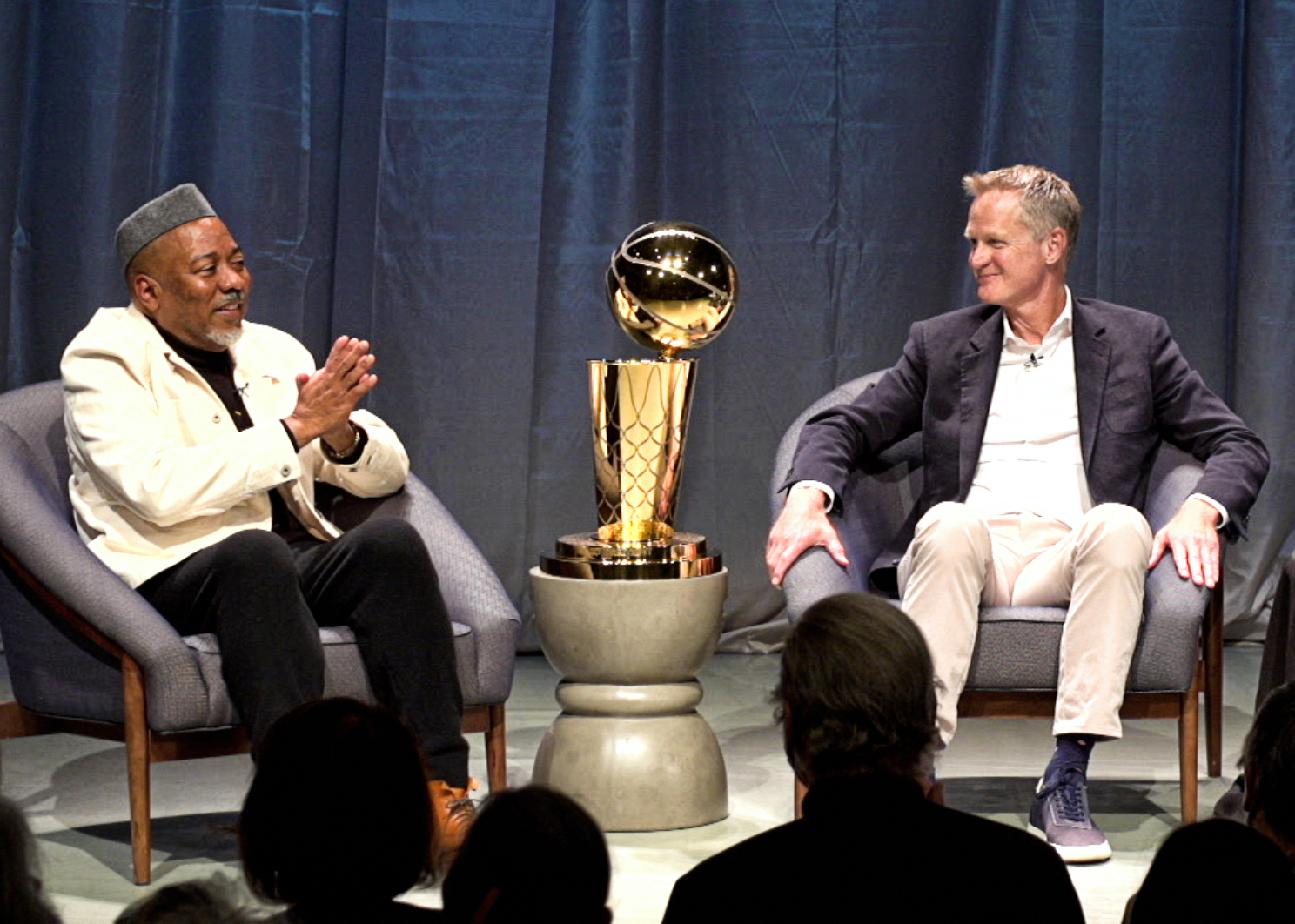 What could ballet and basketball possibly have in common? That was the topic for an onstage conversation between Alonzo King, the founder and artistic director of San Francisco’s Alonzo King LINES Ballet, and Steve Kerr, the head coach of the 2022 NBA champion Golden State Warriors. As it turns out, “ballet and basketball have more in common than the letter B,” said Carolyn Tyler, the former local ABC news anchor who facilitated the event, which was held at SF Jazz Center on September 16 and included a performance by LINES dancers Adji Cissoko and Shuaib Elhassan.

The chemistry between King and Kerr was evident during their lively 90-minute discussion on everything from meditation and mindfulness to social justice, teamwork and the many commonalities between art and sport. What follows are edited highlights of their conversation.

On Getting Into the Zone

Alonzo King: I recently saw the Warriors play, and what struck me is the focus and concentration on one goal. It’s a unification minus all distractions toward one single thing.

Steve Kerr: I don’t know how it feels as a dancer, but as an athlete you have to get into that zone, find that mind–body connection. That’s what I was watching just now, with the LINES performance, was the connection between the mind and body. I think the most incredible experience I’ve ever had in a basketball game was when Klay Thompson scored 37 points in one quarter, and it was like the audience was taking part. It was like a religious experience. That’s the connection I make between art and sports, where you see someone who is so connected—their mind, their body, their spirituality—everything is so connected that they’re able to achieve something so beautiful.

AK: I think with dancers that zone is the point. Sometimes, with intense training there’s so much emphasis on what is wrong, and what could go wrong, that you have to fight to get that out of your head. [At LINES] we have a thing in training where you don’t do all the talking—you may have a point of view and begin to express it, and then you get out of the way and let the spirit move you. That is a super-important balancing act.

On Self Versus Team

AK: I think our company is unique in that way. The dancers want to support each other, and they look from the side of the stage to see how another performer is doing. And when they see depth, they want to step into it as well. Or if they see where it’s not, they want to lift it up. In a pas de deux, you really become one. The idea is to support this person, so that what they’re experiencing, you’re experiencing.

SK: More and more athletes are playing one sport, which I’m not a fan of. There’s a lot to be gained from playing different sports—you use different muscles, you hear different voices from different coaches, you see strategy in different ways.

AK: Having multiple forms of dance inform your body and your mind is brilliant. So often you’ll find dancers who are trained in one way of being, and they don’t find what we would call the pathways of movement. It’s a series of this and that done well, but it’s dead. When you’re challenged in how you move, you get more information, and you become a better dancer.

AK: When [LINES] began 40 years ago, that was part of our purpose. You know: “We’re the Black dancers.” I had gone to all the big schools—American Ballet Theatre, School of American Ballet—and it was a very tight door to get in. I felt that when I started a company, it was not going to be like that. I wanted it to look like the world. My take is that what Malcolm X came to realize, this is about the fellowship of humanity. And Martin Luther King, Jr. said, “This is about all of us.”

SK: The NBA has been really wonderful in supporting players and coaches in the social justice movement. The leadership really supports our personal convictions and things we do in the community, and team-related things. As a coach, I feel a responsibility to get the group to communicate and be part of the community.

AK: My father was a follower of Ramakrishna and he meditated. I’ve heard people say that the price of greatness is solitude. There is something about that that is so nourishing to me. To be still. Solitude is a big thing for me. You have to have peace.

SK: We talk about it as a team a lot. Our team will do meditation and yoga as a group. It’s a really powerful tool to make that mind–body connection. The combination of the movement and the breathing really simulates what our players are doing during the game—you’re moving, you’re breathing, you’re focusing.

On Transcending the Body

AK: If we think we’re the body, and we feel that the only perceptions we know are through the five senses, we’re in prison. We think our body is ourselves; it’s not. It has an expiration. So who are you? It’s incumbent on all of us to answer that.

SK: I think it’s one of the hardest things athletes have to go through—when they retire, when their bodies can’t respond anymore. In general, athletes don’t get so deep, like dancers do, where they ask what they’re about. They just go, “My knees hurt.” [Laughter.] So maybe I need to teach my guys about consciousness a little bit more.

AK: But it’s interesting that with dancers, sometimes when things are starting to fall apart physically, they become more profound artistically.